The Silph Arena's first global cup of Season 2 begins on October 1st! With it comes a new opportunity to prove your skill and climb the global and local leaderboards! The Sinister Cup - inspired by the spooky things that go bump in the night - follows the same basic rules as past Cups, with a few key differences. Here's what you need to know:

What Is the Sinister Cup?

Each month the Silph Arena holds a month-long Cup - a 'themed' PvP tournament - that provides tens of thousands of trainers around the world a specially-designed competitive challenge and a chance to prove they're the very best. The Silph Arena is the world's largest global network for ranked Pokemon GOTM tournament play.

During the Cup (October 1st - 31st), local Silph League communities host and record a special tournament using the free Silph.gg tools. Wins and losses in this local tournament affect your player rank on local and global leaderboards, earn you the Sinister Cup trophy for your Trophy Case, and may eventually even earn you an invitiation to compete at Regionals, and even the Continental or World Championships held at the end of the Season!

All players are welcome to compete, whether it's your first tournament or your hundredth! Find a local tournament near you on the Tournament Map!

The Sinister Cup has a few special rules (designed to provide added challenge and fun) that differ from standard PvP combat in Pokemon GO:

Take a moment to review the Arena Rules linked above. The rules have been updated for Season 2, make sure you're familiar with all of the changes!

Registration for the October Cup will become available to local community leaders on September 17th - but Sinister Cups cannot begin until October 1st and must be concluded by October 31st. Find a Cup tournament near you via the Tournament Map!

How Do I Host a Sinister Cup Tournament in My Community?

How Do I Become Authorized to Host Tournaments on Silph.gg?

All Silph League Discord community admins simply need to add themselves as 'Tournament Admins' via the Discord @SilphRoad bot:

Telegram channel and group admins are automatically authorized on Silph.gg.

Can I host multiple Sinister Cups in my community in October?

Yes. However, only one Cup each month will have significant impact on each participant's Global Ranking. Participants may choose at the start of a Cup if they want that specific Cup to be weighted more heavily than the others.

Does the Sinister Cup have to be hosted on a specific date?

Any date between October 1 and October 31, 2019 is a valid date to hold your community's Sinister Cup. The tournament registration page will not allow registering your Cup for an invalid date or time - so as long as you are able to create your tournament on Silph.gg, you will know it is set for a valid date. Remember, it must be concluded by the end of October 31st to count for rank!

I am a community leader of a Facebook Group (or other platform like Slack, Line, etc). How do I host the Sinister Cup for my community?

The Arena team is working quickly to enable non-Discord/Telegram communities to host the Cup. Stay tuned for news on this front!

How Do I Join a Sinister Cup Tournament in My Community?

Find a local Cup being hosted by a community near you via the Tournament Map and read the event details on the event's RSVP page!

How Important Are Monthly Cups for My Player Rank?

Very. The vast majority of player rank in the Arena is derived from performance in the global, standardized Cups. (This is because Cups allow the Arena to observe the same controlled competitive scenarios for each player!)

Why is the Sinister Cup (and all non-Cup ranked tournaments) played in Great League?

Great League (max 1500cp) provides a diverse, new playing field with many options for creative, competitive teams. It also allows more casual players to join tournaments at meetups without being completely unable to compete with level 40 trainers who often sport the same level 40 Legendary Pokemon. Great League also marks immediately irrelevant much of the amassed arsenal of those who manipulate their GPS location ('spoof') to circumvent in-game mechanic limiters and acquire unnatural advantages.

Where can I learn more about global player ranking?

You can learn more about Global Player Rankings by reading the Guide to Player Rank.

About the Competitive Season »

Time to study up! Conquering this meta requires preparation and practice. Review this collection of guides and resources from Arena contributors and community content creators to help you on your way to victory: 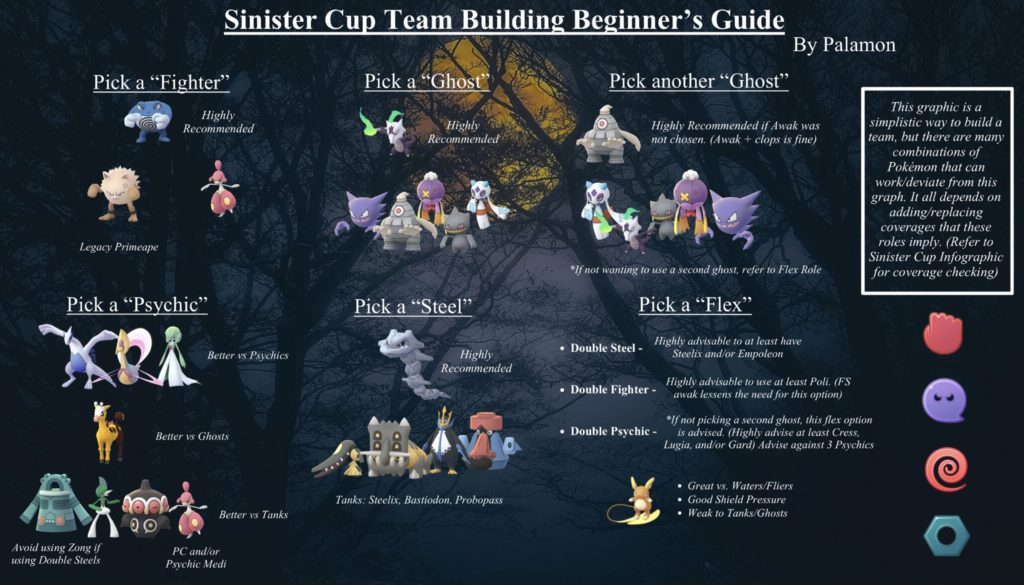 Guide to building your Sinister team from Palamon.

Copy and paste this string into the Pokemon GO search filter to see all of your eligible Pokemon! Learn how to copy and paste into Pokemon GO with this guide for iOS and Android. 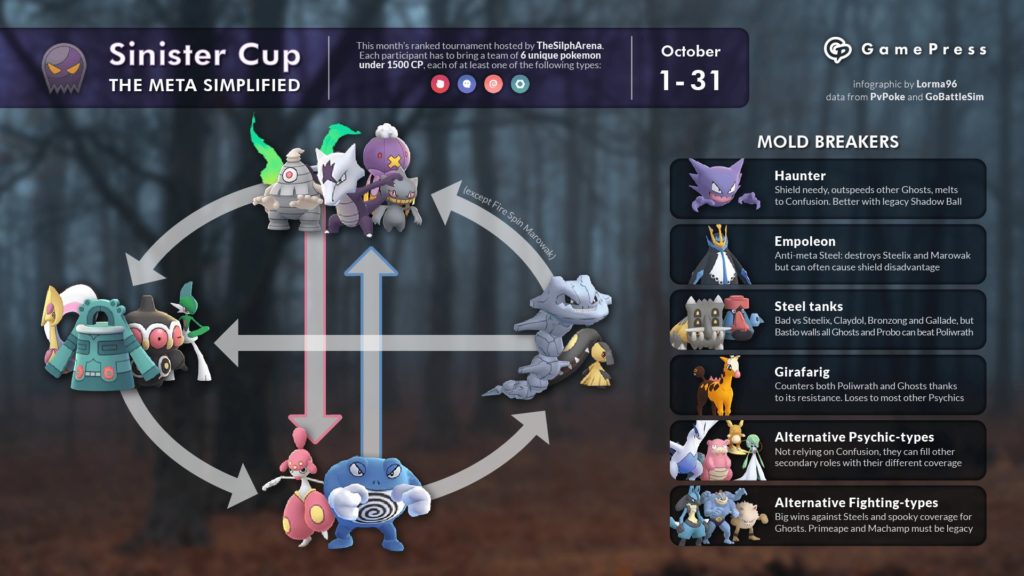 Infographic from GamePress boiling the Sinister meta down to its core.

A look at the Sinister Cup meta in video overview form. 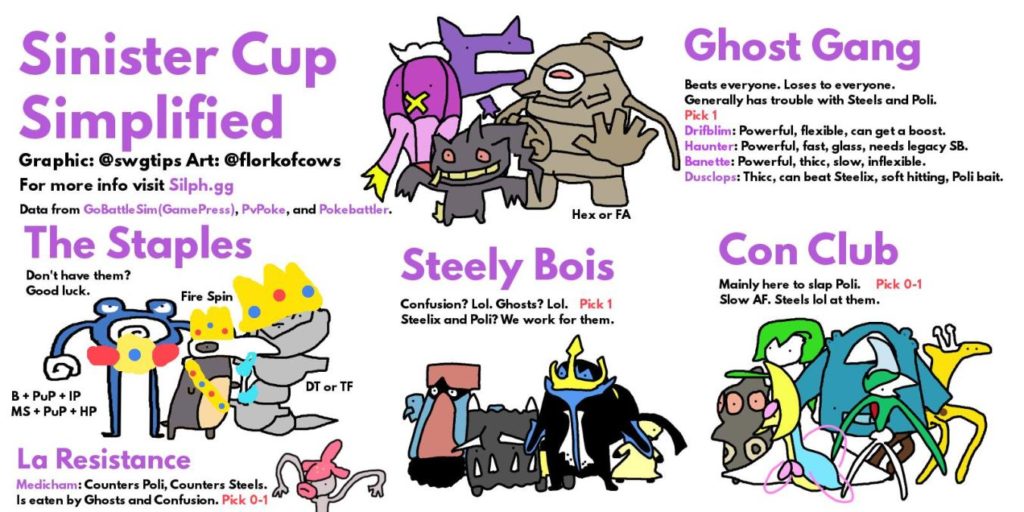 RyanSwag describes the components that make up the Sinister meta 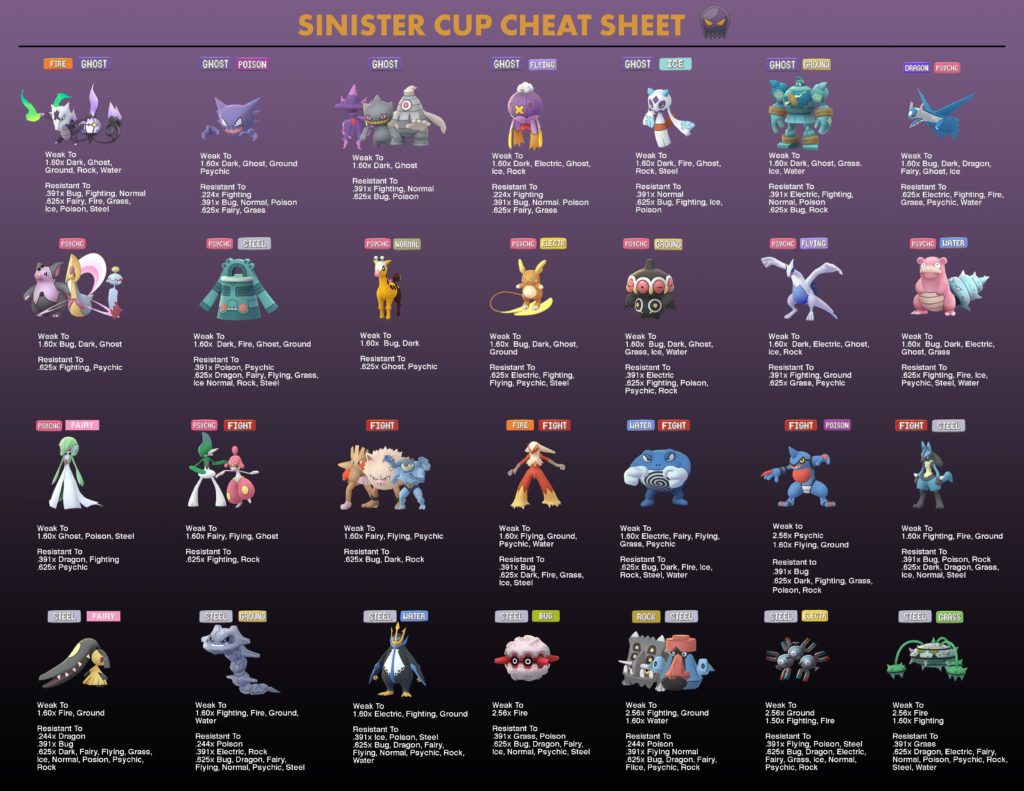 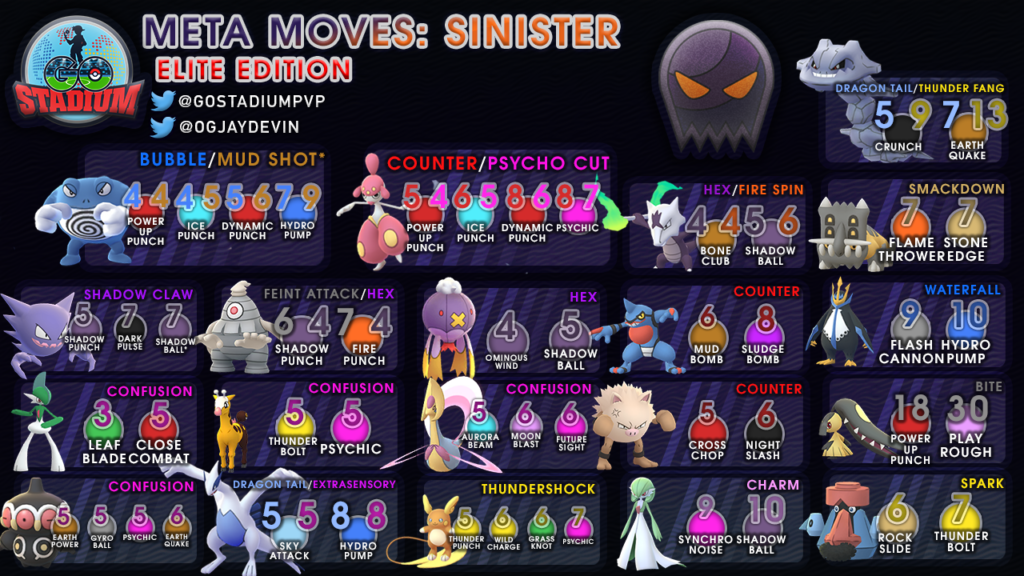 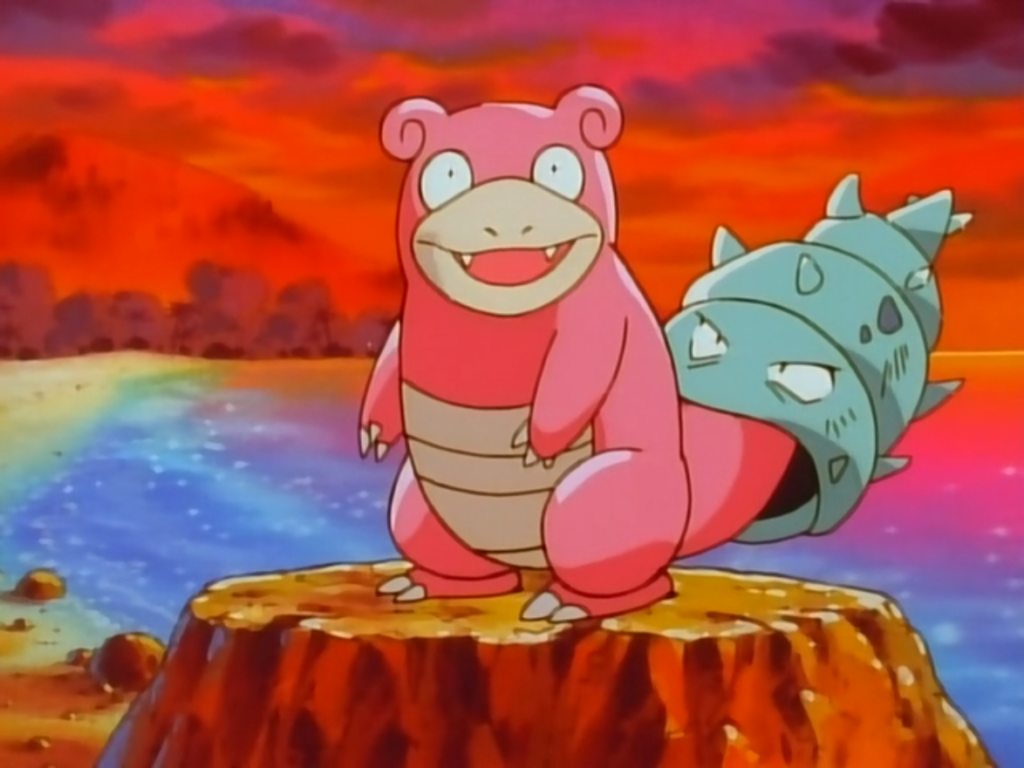 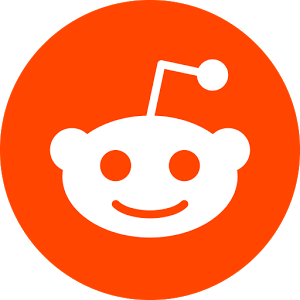 Toshi9227 describes how to use Slowbro on a Sinister team after successfully using it to grab second place in a 100+ person tournament. 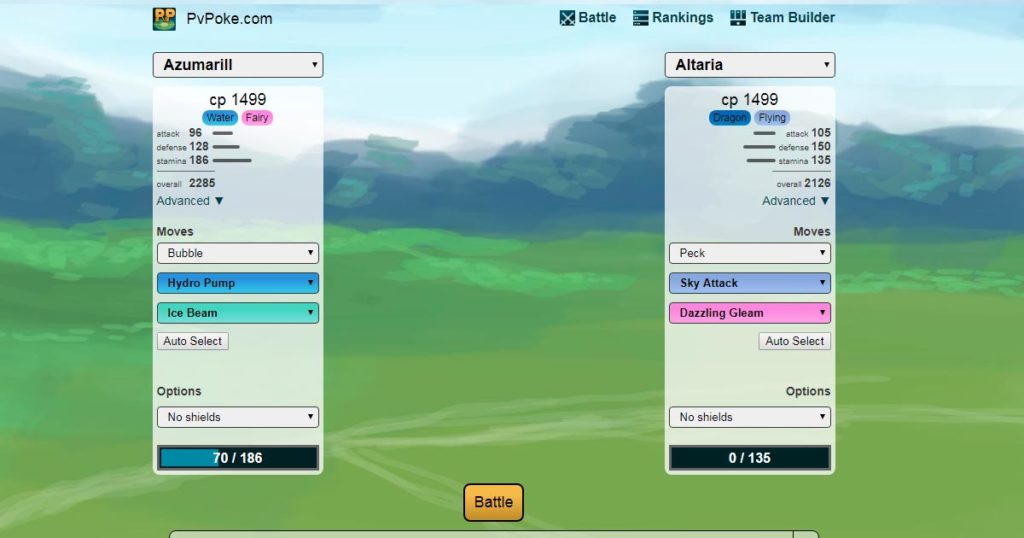 Tangent444 explains what "safe switching" is and how to use the strategy in the Sinister Cup meta. 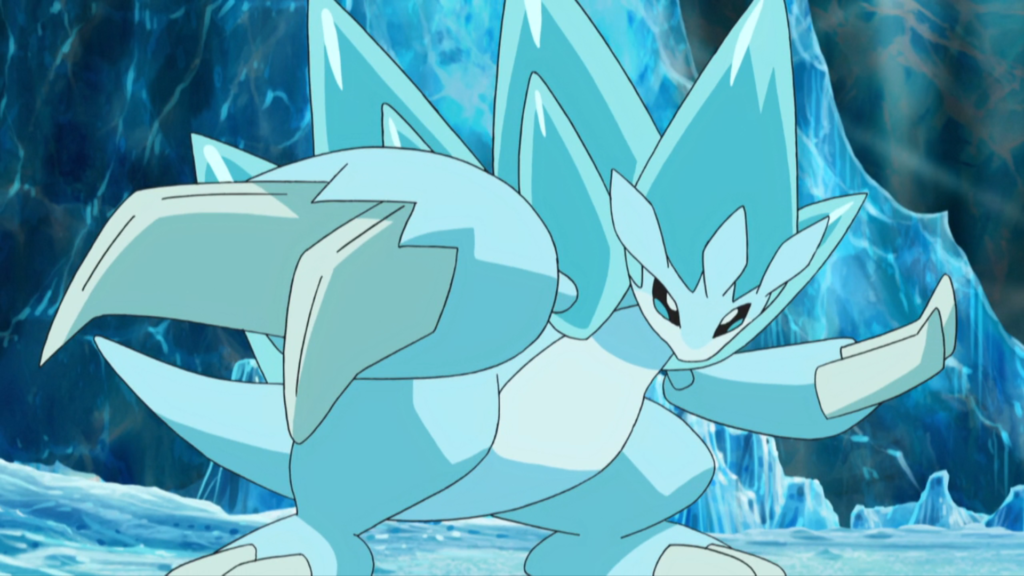 Under The Lights: Alolan Sandslash (Sinister Cup... and beyond)

A deeper dive into a Pokémon that may deserve a little more attention in The Silph Arena's current Cup (and beyond!).

Under The Lights: Generation 5 in Sinister Cup

A look at how Gen 5 Pokemon like Excadrill, Golurk, Klang, Ferrothorn, and Jellicent will perform in the Sinister Cup meta. 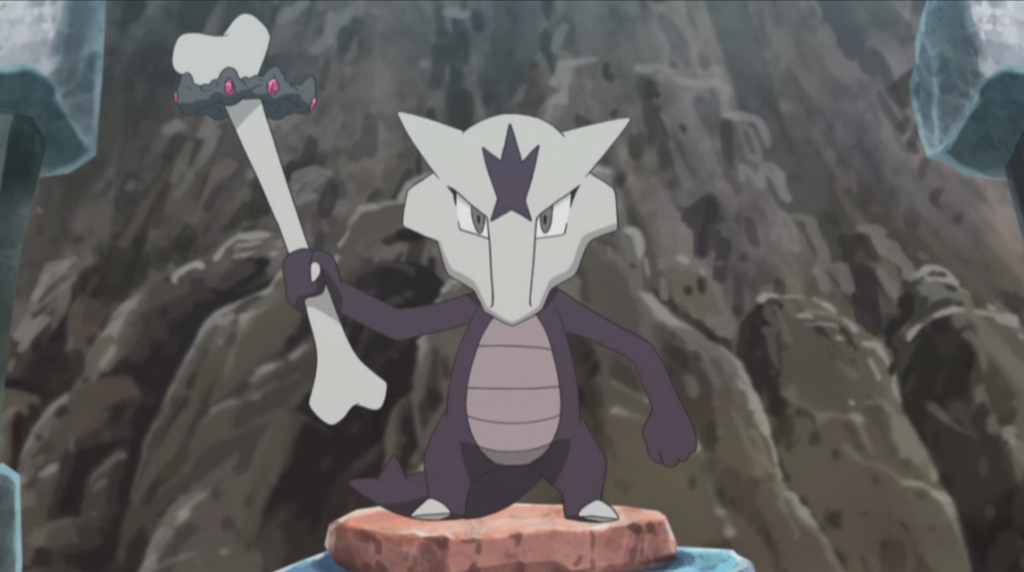 A deeper look into Alolan Marowak's Fast move and how it affects it's matchups with ghost-types in Sinister Cup. 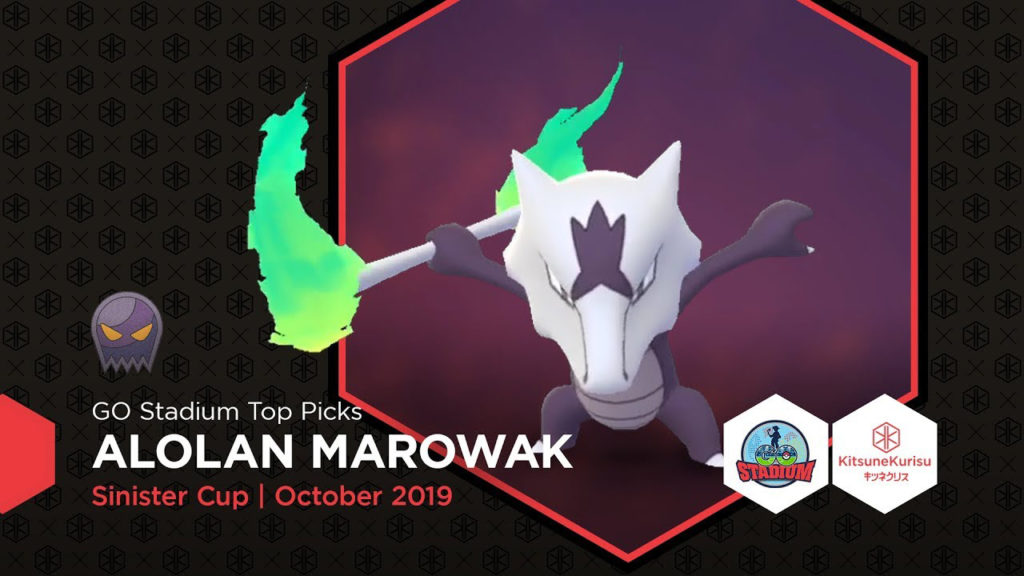 A beginner-friendly step-by-step guide on how to build your team for the Sinister Cup.

As you plan your battle team, consider the species which appear most frequently in this meta: