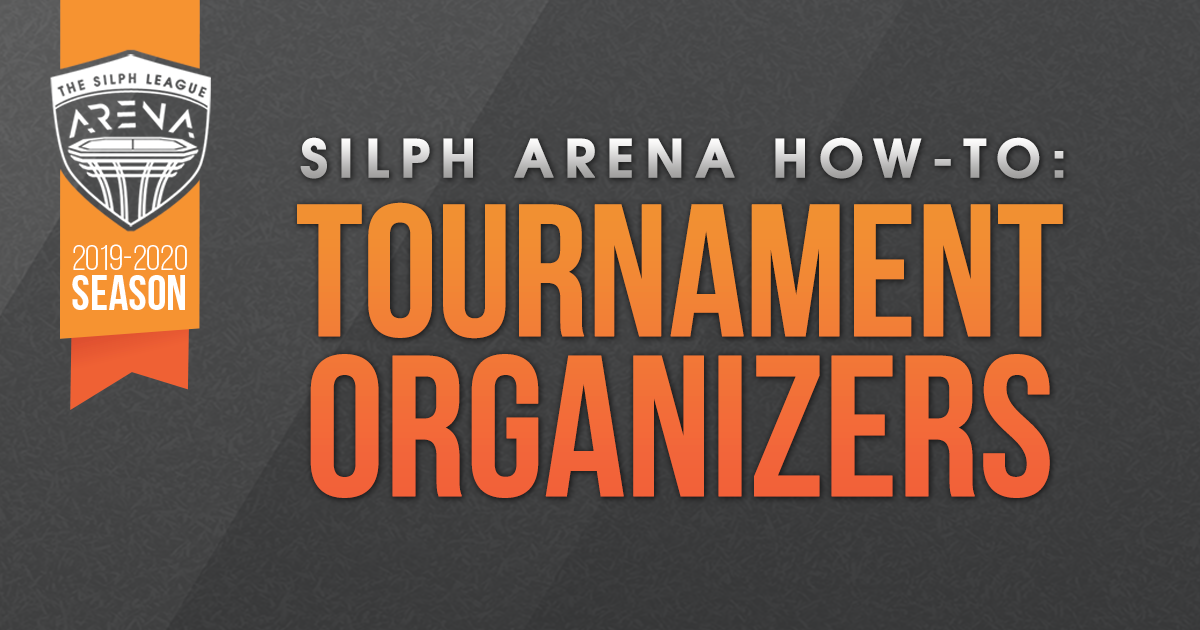 Welcome! Whether you’re looking to get started as a new Tournament Organizer or just want a quick refresher, this article contains all the information you need to host your first successful tournament.

In this guide, we’ll cover the following topics:

If you’re new to the Arena (or hosting tournaments!) we recommend reading from beginning to end, but you can use these links to jump to each section if you ever need a refresher!

1. Adding the Silph Bot and Getting Set Up

The Silph Road Bot will help you connect your local Discord server or Telegram group to the Silph League network and the Arena. The Silph Road Bot opens the door to many of The Silph Road’s resources and tools, such as showing up on the League Map, awarding Community Day Check-ins and Badges, and getting authorized to host ranked Silph Arena Tournaments! Today we’ll be focusing on getting yourself and your fellow admins set up to host PvP tournaments in the Silph Arena.

Step 1: Link your Discord or Telegram account to your Travelers Card Step 2: Invite the Silph Road Bot to your server

Step 3: Add yourself as a Tournament Admin

Step 1: Link your Discord or Telegram account to your Travelers Card

Step 2: Invite the Silph Road Bot to your group

Now that you’re set up as a Tournament Admin, lets take a look at the Admin Page on silph.gg.

Head to the silph.gg homepage and log in to your account. Click on the “ADMIN” option on the menu bar, and then select your community from the drop down menu.

*If the “ADMIN” option is not on the menu bar, or your community does not show up, try logging out and back in first.

If your community is new to the Arena, your Admin Page will be pretty empty. As you host more tournaments, the page will get busier. You should see:

So you’ve added the Silph Road bot to your community and got set up as an admin. Now it’s time to create and host your first tournament. Head over to your Admin Page on silph.gg to get started! First, you need to decide what kind of tournament you want to host. There are 3 different types of tournaments:

Use this section to let your community know what your event is all about! Create a catchy title, let people know where and when the tournament is, and give some details about it! You can also select whether or not you want your event on the Tournament Map. Putting it on the map will let anyone who is not a part of your community see when and where the tournament is. It’s a great way to bring in new people!

Manually drag the pin to the location of your event on the map. If you don’t want it showing on the map, unselect that check box.

In the “DETAILS” box, you’ll want to give any important information about your event. Tell people what entrance to use, specific directions for finding your event space, a general overview of the schedule for the day, or anything else happening outside of the tournament. The “DETAILS” box uses the same format as Reddit Markdown, so you can add formatting, links, and style changes throughout.

If you’re streaming your event, put the link in the “STREAM URL” box and it will show up on the silph.gg homepage!

And you’ve created the tournament! Be sure to share the link with your community and advertise leading up to the day of your event. Now that you’ve got everything set up, it’s time to talk you through the tournament day procedure and everything you need to know!

After all the preparation, the time to hold the actual tournament is here! Luckily, most of the hard work is done. At this point, your tournament is accepting RSVPs and pre-registration, but when you are ready to get your event started, you’ll need to go to the “Host” page of your tournament (there will be a button on the top right) to advance to the next phase:

Hit “GET CHECK-IN CODE AND BEGIN”

This button will generate a four-digit code that you should tell all your participants. At this time, all competitors will need to make their final decisions and enter their team of six, as well as accurate CP for each of them. When they have locked in all of their Pokémon, they can enter the four-digit code to check-in. You will be able to see a list of who is checked in on the host page. If you are playing, don’t forget to register your own team as well! Make sure you also look at the “Not Yet Checked-in” and “Interested” tabs to ensure you aren’t missing anyone before you begin. Be vocal! Players that did not RSVP may also be there hoping to play, so communicate with your players and take care not to accidentally lock anyone out.

Once you have double-checked that all players in attendance have fully checked in, you’ll be ready to officially start the tournament!

Once you hit this button, all competitors are locked-in and the first round will be generated. Now it’s time to battle!

When rounds are generated, each player will be paired with an opponent, and each pair is assigned a number. If your tournament takes place in a location that would allow for it, table numbers can be a huge help getting everyone to their opponent, especially if there are a lot of people that don’t know each other.

Once everyone has found their opponent and started battling, your job is simply to be available to assist anyone with issues. Adjudicating questions about re-starting due to lag, and enforcing the slow-play rule are often the biggest jobs of staff during average tournament play. Make sure you are well versed on the official rules, because as Tournament Organizer, you are the one everyone will look to for resolving disputes.

Encourage all trainers to report their results as soon as they have completed their match. In rare situations, it may be your responsibility to enter the information for them, or to correct an error in an entered result, but these Staff Corrections should be used sparingly. It is important all competitors learn to report for themselves.

When all results are entered, and you are sure you don’t need to make any further corrections, you will need to click the “Start Round” button to advance. Once you’ve done this, no changes can be made to the last round!

If at any point, a player chooses to leave the tournament, you can use the “Remove” button on their name on the Host page. But be careful! You may only re-add a player during the same round they were removed. After that point, they will not be able to re-join the tournament.

Once all matches in the final round have been reported, and no further corrections need to be made, you can hit the “CONCLUDE TOURNAMENT” button to officially enter the final results into the database. The name of the winning player (or players, in the event of a tie) will appear at the top of the page, and all players’ global ranking will update in a matter of minutes.

If you’ve ended with a tie, there are a few options you may choose to use as a tiebreaker. Ties are perfectly fine, declaring a single winner is purely for bragging rights, or prizes if you have elected to award them; at this point, as far as the Arena rankings are concerned, you’re all done.

If you do choose to use a tiebreaker, you can opt to use:

And that’s it! You’ve successfully hosted your first tournament! We hope everything went smoothly, but if not, use this as a learning experience and figure out what might have helped everything work better. Apply those things next time, and your events will only get better and better!

You can also chat, get help, and exchange ideas with thousands of trainers and Tournament Organizers from around the world on The Silph Arena Discord server, Telegram group, and subreddit!

Q: What is the protocol if I need to rematch due to lag/technical difficulties?
A: Players must use the same team of 3 and use the same lead Pokémon. All other aspects (shielding, swaps, charge moves) of the previous game do not need to be re-created.

Q: Are private ranked tournaments permitted?
A: Yes. You can hold an exclusive tournament as long as you aren’t restricting participation based on protected classes like race, gender, etc., and Tournament Organizers have the right to exclude anyone who is banned from their community.

Q: What happens if a new species or combat changes launch in-game during the middle of a Cup?
A: Because Arena Cups last a full month on average, there will often be new species and even combat changes during a Cup. As a general rule, all new species are permitted unless explicitly banned. The Arena reserves the right to ban new species (or even existing species after combat changes) if the diversity or balance of the Cup would be sufficiently compromised to warrant it; however, we hope this will be a rare occurrence! Tournament Organizers may NOT elect to ban or allow Pokémon at their own discretion.

Q: Is it against the rules for players to use battle simulators during a tournament?
A: Competitors may not utilize any scripted, programmatic, or otherwise dynamic resources (i.e. PvP simulators or any program that requires inputting information). Competitors may review static notes (i.e. type charts, meta infographics, reminders of key matchups); however, they must stay within appropriate time limits as stated by the Tournament Official. Taking too long to review notes may incur a slow-play penalty.

Q: Is it permitted for a trainer to teach a second move to a Pokémon mid-tournament, considering second moves are not registered?
A: No. As outlined in section 2.6, you cannot evolve, TM or power up a Pokemon once a tournament has started. Adding a second move would be changing the move set and therefore is not allowed.

Q: Is it acceptable to guess at an opponent’s charge move by watching their hand motions?
A: Players may take measures to hide what charged move they are using (such as holding the phone under the table, turning away from their opponent, etc). Attempting to defeat such measures for the purpose of watching a charge move being deployed will be considered cheating. Players are not allowed to actively seek out hidden information.