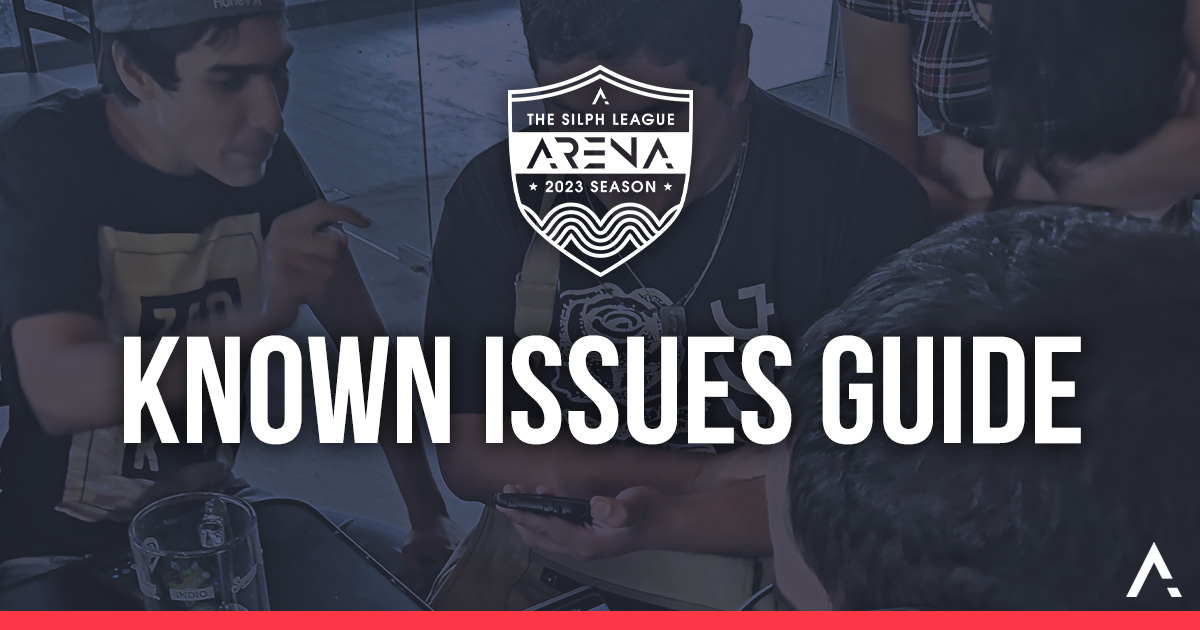 Welcome, Judges! When it comes to PVP, and games in general, there are always various bugs and issues that pop up, and as Judges, it’s best to stay on top of the glitches so that you know what to do when some pesky bug pops up! To that end, the Silph Arena Legislation Team actively monitors both the Niantic GO Battle League Known Issues as well as the General Pokémon GO Known Issues, and will do their best to provide regular updates and rulings on how to handle said issues as they change over the course of the season. This document will serve as a guide to bridge the gap and help our fellow Tournament Officials to approach disputes with a better understanding of what specific situations may or may not be grounds for a rematch for the Arena.

If you believe you found a new bug or issue that is neither addressed here nor in Niantic’s known issues page please feel free to share your findings by e-mail to team@silph.gg or through The Silph Arena Discord Server.

Technical issues are grouped by topic. Each issue will be accompanied by a quick description of the problem and a small video to improve your detection skill. Moreover, game mechanics will be quickly explained when they can be confused with real issues. The whole picture is completed by an Official Arena Stance on whether a rematch is warranted.

Rules Reminder! Before a rematch takes place, the opponent who did NOT request the rematch will have the option to select if both competitors will use the same three Pokémon as the original game or use the same lead Pokémon while allowing the back two Pokémon to change.

Each case must be contextualized and you, as a Tournament Official, must put your effort to figure out if the issue made an impact on the game outcome. This is not an easy task in many cases. But fret not, The Arena Team is always here to help!

Enough with the talk, let’s dive in!

Click on the link of the issue you’re having to learn more about the Official Arena Stance:

*A rematch must be granted if specific in-game behavior is followed by the Competitor.

Section 1: Current State of the Game

This is a list of technical issues and nuisances that are currently part of the game. They will NOT BE GROUNDS FOR A REMATCH, no matter how significant the incident affected gameplay.

One-Turn desync after a Charge Move

Two different examples (Stutter and Freeze) of Framedrops during a Charge Move Mini-Game. One affected the outcome of the Mini-Game while the other did not.

Charged Moves activated a turn before a Fast Move ends are intended to take priority over the Fast-Move damage. This video shows the mechanic working as intended; Skuntank completes 4 Poison Jabs (8 turns) and starts a new one. Castform completes 3 Hexes after 9 turns. Damage of the 5th Poison Jab would be applied at the beginning of turn 10, at the same time as the opponent activates their Charge Move. The Charge Move activates before the Fast-Move damage is applied (which would have fainted the Castform). However in the current state of the game this is still notably inconsistent and frequently the Fast-Move damage takes priority.

Lag is known as a single or several connection errors that happen during the game and which affect gameplay. These connection errors might be accompanied by the “Weak Connection” prompt, the “Loading Poké Ball” on the upper left screen, or no visual sign at all. Moreover, the visuals “Weak Connection” and the top left “Loading Poké Ball” do not always mean that an active lag is occurring.

So, now what? Tournament Officials should try to focus on whether a one-sided advantage was gained by extra energy gain, or unnecessary damage. Generally speaking, anything that caused a disadvantage for the player that wasn’t caused by the player’s skill, action, or decision making or a Current State of the Game issue.

All issues that can be associated to this section MUST be analyzed taking into account the involved player’s intentions, proven ONLY by visible taps on the screen or audible evidence (external microphone activated) aiming at fast attacking/switching/throwing a Charge Move/shielding.

Player is unable to continue

Pokémon Fast Moves are slowed down

An example of Visual Lag

Example 1: A Pokémon faints by cumulated Fast Move damage and said Pokémon could have been able to reach their Charge Move, affecting the outcome of the match.

Example 2: The cumulated undue Fast Move damage is so much that it affects late-game matchups, therefore the outcome.

Glitch during a Charge Move

Fly me to the moon A Wigglytuff being displayed as a Shiftry.

Mini-game not being shown

Shield being used without tapping it

Shield not being used even if tapping

Delay in switch animation and asset loading after a swap

Damage landing on the switched-in Pokémon.

Buttons disappear during the battle

Charizard’s Charge Moves are shown instead of Umberon’s. In addition, they do not update with Umbreon’s Fast Moves.

One-sided one-turn delay at the beginning of a battle

White-Screen error from the point of view of the Opponent.

Rules Reminder: 2.5 START OF A BATTLE

A battle officially begins when the first Pokémon has been visually revealed in the Pokémon GO™ Battle. If the Battle is cancelled, either by a Competitor or by technical malfunction, before the first Pokémon of either Competitor is revealed on screen, both Competitors have the option to choose new Battle Parties. If there is doubt as to whether the Battle was cancelled before the first Pokémon of either Competitor was revealed on screen, video evidence must be provided by the claiming Competitor as proof. A new Battle Party may be the same as the originally selected, partially different or totally different.
If one opponent gains any knowledge of hidden information (as defined in Section 2.6 Hidden Information) or their opponent’s Pokémon, they are obligated to inform their opponent of what they saw or heard and their own lead Pokémon so that both Competitors enter the battle with the same information. The battle must then be replayed using the same lead, but Competitors may change the two remaining Pokémon in their Battle Party if they so wish.

This section is aimed at defining a few cases where game mechanics are confused with Lag related issues and/or other technical issues.

Switch not being triggered during Confusion turns

Connection and device stability can be tricky to guarantee during the whole match. This is why lag attributed to the individual player’s device or connection, and not to a bug listed elsewhere on this list—or simultaneous lag-related bugs on this list—may be grounds for a rematch, but only once during the tournament . After that, the Competitor must change their device/provide a better connection or accept future results as they are. We strive to maintain a level playing field for all competitors, but we must also be respectful of everyone’s time and effort. Permitting an individual to repeatedly hold up a tournament due to the shortcomings of their own device or connection is unfair to the other competitors that have brought the tools required to battle effectively.

Several freezes happening during the battle

It must be noted that a rematch will never be granted, even once, if any of the following user-based issues occur:

Turning on the “Do Not Disturb” mode, connection checking, phone charging before the battle, keeping it cold before the start of the battle, and closing all non-essential apps during the battle are useful tips to avoid these situations.

These issues are currently very rare or simply have been solved with previous game updates. Nonetheless, they can occur in future game releases as previous issues have come back with new patches. This non-comprehensive list is to aid Tournament Officials in these very peculiar scenarios.

Buffs/Debuffs Not Being Cleared

Buff on Poliwrath not being cleared

In the video Gallade has the higher attack stat.

All the issues described above must be followed by Tournament Officials. However, Competitors should always try to reach a peaceful and mutually fair agreement first, independently from stances reported here in this document. When an escalation occurs, Tournament Officials should try to have at least three officials involved in a dispute and must follow what’s described herein. The decision of the majority should be enforced, in order to provide the best and most objective solution to the problem.

If you feel a staff decision warrants appeal, all evidence including video evidence, screenshots of conversations with both Tournament Officials and Rival, and useful information should be submitted via the Report Misconduct form to be reviewed by the Arena Infractions Team. Competitors or Tournament Officials who have questions or wish to receive assistance in applying current rematch rules can reach out to the Silph Arena Team on the Arena Official Discord (Support, rules-and-protocols section).

Note that the Known Issues Guidelines apply to ranked Arena Tournaments and their Officials. Special Tournaments such as Silph Arena Factions, Continentals, World Championships, among others may differ in terms of ruleset and stances, due to the higher level of adjudication.